US intelligence has concluded that Saudi Crown Prince Mohammed bin Salman approved an operation in Turkey to “capture or kill” veteran journalist Jamal Khashoggi, but the Biden administration stopped short of sanctioning the Gulf kingdom’s heir.

The four-page report declassified by the White House and released on Friday said the assessment was based on factors including Prince Mohammed’s “control of decision-making in the kingdom”.

The report pointed to direct involvement of key lieutenants of the crown prince in the 2018 operation against Khashoggi, as well as members of his elite protective detail, the Rapid Intervention Force. It also noted Prince Mohammed’s personal “support for using violent measures to silence dissidents abroad, including Khashoggi”.

US secretary of state Antony Blinken told reporters on Friday the administration had opted to recalibrate rather than “rupture” its relationship with Riyadh, and defended the decision not to personally sanction Prince Mohammed.

“The [US] relationship with Saudi Arabia is bigger than any one individual,” he told reporters. He argued the US decision to shine a “bright light” on the issue already constituted a significant action: “I think this report speaks for itself.”

Khashoggi was one of Saudi Arabia’s most prominent journalists and criticised the crown prince in columns he wrote for The Washington Post. He was killed at the kingdom’s consulate in Istanbul in October 2018 and his body dismembered.

Otherwise what we send as a message to the world, whether it be to ally or foe, [is] that you can assassinate an opponent, and really face no consequences

The report indicated it was not clear whether the operation was a mission to kill Khashoggi from the outset. “We do not know whether these individuals knew in advance that the operation would result in Khashoggi’s death,” it said. The report did not present any new evidence directly linking Prince Mohammed to the killing.

Although the findings were expected, the US agencies’ assessment is embarrassing for Prince Mohammed, who is the kingdom’s day-to-day ruler and has sought to put the murder behind him. It will bring fresh scrutiny on his autocratic leadership and threatens to strain relations between the US and one of its traditional Arab allies.

Saudi Arabia’s state news agency said its government rejected the report’s assessment. However, it added that the Saudi foreign ministry affirmed that its partnership with the US was “robust” and said it “looks forward to maintaining enduring foundations that have shaped the framework of strategic partnership between them”.

Blinken earlier on Friday issued a new visa restriction policy — the “Khashoggi Ban” — aimed at individuals who work on behalf of foreign governments to target dissidents abroad. Blinken said the US had imposed the ban on 76 Saudi individuals “believed to have been engaged in threatening dissidents overseas, including but not limited to the Khashoggi killing”. The names will not be made public.

Only in rare instances has the US sanctioned heads of states or those in line for top roles, typically when the bilateral relationship is deemed irreparable.

Nevertheless, the decision to avoid sanctions on Prince Mohammed disappointed some Biden supporters. Democracy for the Arab World Now, an organisation founded by Khashoggi, called on the US government to impose “the full range of sanctions available” on Prince Mohammed.

Bob Menendez, the Democratic chairman of the Senate foreign relations committee, told the news channel MSNBC he would not meet Prince Mohammed if he came to the US and said personal sanctions should be considered.

“Otherwise what we send as a message to the world, whether it be to ally or foe, [is] that you can assassinate an opponent, and really face no consequences,” he said. 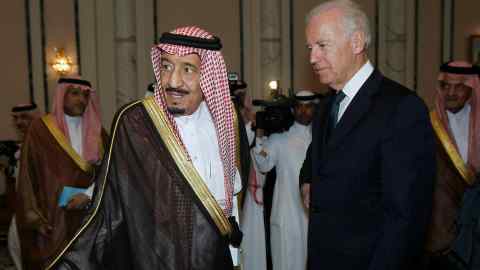 The Biden administration faces a complex balancing act to make good on the president’s campaign promise to make Saudi Arabia a “pariah” while still maintaining a strategic relationship with the world’s top oil exporter and an important regional security partner.

Almost a year after Khashoggi was murdered, Prince Mohammed said he took “full responsibility” for the killing as “a leader of Saudi Arabia”. But Riyadh has consistently sought to characterise the murder as a rogue operation and denied that Prince Mohammed had any knowledge of it.

The US assessment said it was “highly unlikely that Saudi officials would have carried out an operation of this nature without the crown prince’s authorisation”, citing his “absolute control of the kingdom’s security and intelligence organisations” since 2017.

The report named 21 Saudi officials who it said “participated in, ordered, or were otherwise complicit in or responsible for” the murder of Khashoggi on behalf of Prince Mohammed. They included Saud al-Qahtani, who was an adviser to the crown prince and considered by many to be his enforcer, and Ahmed al-Asiri, who was deputy intelligence chief at the time.

Qahtani was among 17 Saudis the Trump administration sanctioned for their alleged role in the operation. The designations did not include Asiri.

After the report’s release on Friday, the Treasury announced sanctions against Asiri, subjecting him to a US asset freeze, as well as the crown prince’s Rapid Intervention Force.

Donald Trump, the former US president, had stood by Prince Mohammed as the killing triggered Saudi Arabia’s biggest diplomatic crisis in years.

Saudi authorities put 11 people on trial for the killing and eight were convicted of murder. But their names were never released under Saudi law, and human rights activists condemned what they described as a sham trial that exonerated the masterminds. Qahtani and Asiri were cleared because of what the Saudi authorities said was a lack of evidence.

Are the US and China entering a Cold War?

Proactive news headlines including Alternus Energy, KWESST Micro Systems, Phyto Extractions and CytoDyn Proactive, provider of real-time news and video interviews on growth companies listed in the US and Canada, has covered the following companies: